India pacer Harshal Patel put up a Man of the Match performance on his India debut to guide India to a 7-wicket victory over New Zealand in the 2nd T20 in Ranchi. The win on Friday also helped India seal the series 2-0. Harshal credited RCB teammate AB de Villiers for a turnaround in the UAE after he was hit for 30 runs by Ravindra Jadeja.

Harshal Patel said that AB de Villiers’ advice on forcing the batsman to hit on good deliveries helped him in the UAE to get wickets and make India debut. On Friday, Harshal bagged 2/25 while KL Rahul and Rohit Sharma hammered half-centuries as India beat Tim Southee-led New Zealand. 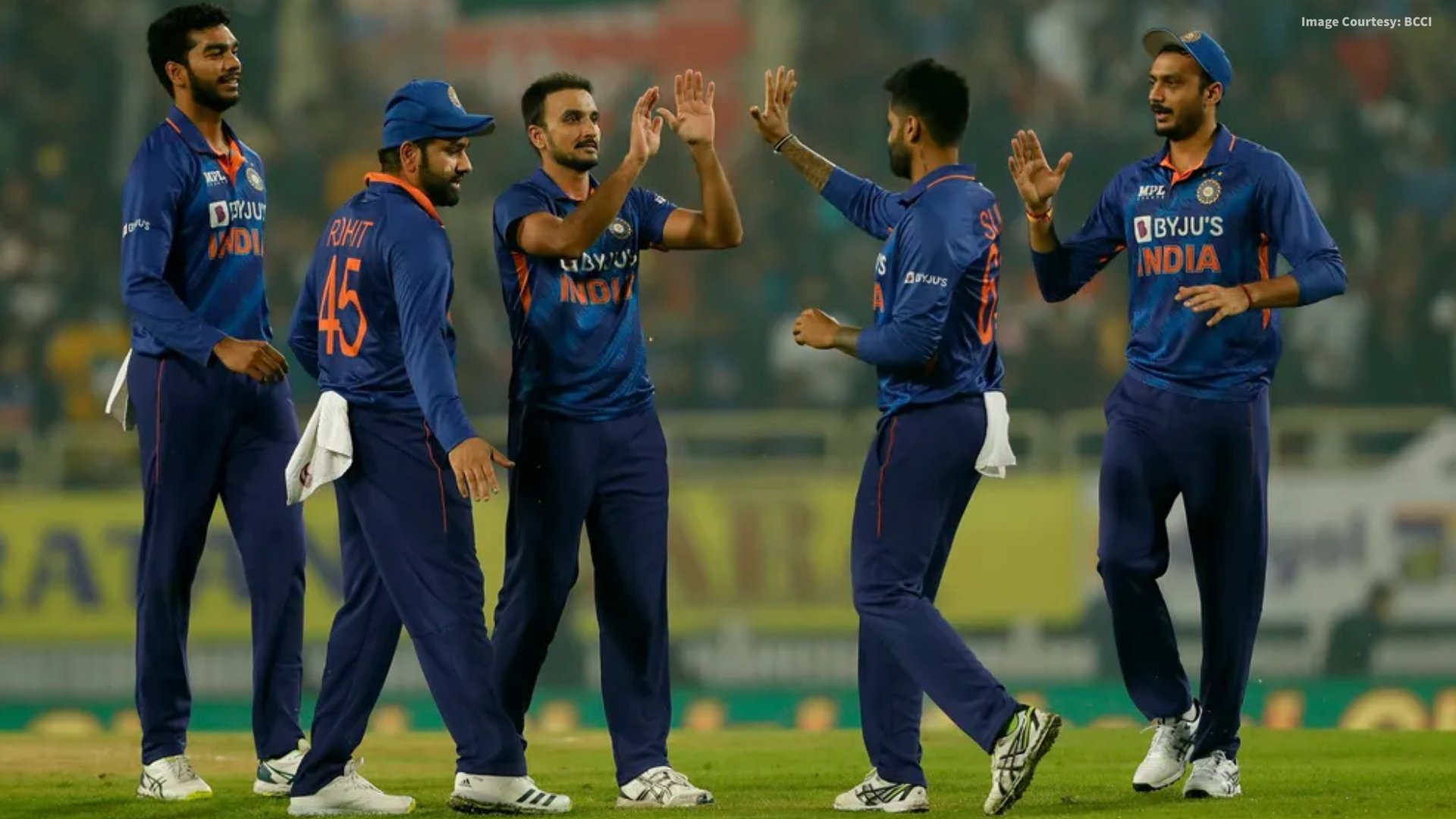 “I think AB has had a massive impact on my career. I’ve always been a silent observer of him. Before we started UAE leg (in IPL 2021), I asked him how to reduce the big overs where I went for 15-20 runs in IPL. He told me, ‘when batsmen hit you on the good deliveries, you shouldn’t change that. Force the batsman constantly to hit the good deliveries. When you are hit on a good delivery and you change in the next delivery, the batsman would have been expecting it. I changed that. And it stayed with me in the 2nd leg of the IPL,” Harshal Patel said in the post-match press conference on Friday.

Harshal was happy with his debut which made him one of the fewest Indian players to don the India colours after turning 30.

“The match did run through. When you are in the process you just get engrossed. It will sink in and it has been a great game. I couldn’t have asked for a better debut. The progress is gradual and slow. For someone like me who is not exceptionally talented, I had to build my game from ground up,” Harshal said.

“I made mistakes and then found things that I can and cannot do well. It has been a great journey and has taught me many lessons which will hold me in good stead even after cricket,” he added.

At the dew-soaked JSCA International Stadium, like other bowlers Harshal Patel struggled as well. When he tried to bowl a slow yorker, Glenn Phillips hit it for a six. The next ball when he tried again, it slipped and turned out to be a beamer and no-ball. But in the next two deliveries, he made an excellent comeback, sending Phillips back. His efforts combined with Ravichandran Ashwin’s 1/19 restricted New Zealand to 153/6.

“I feel you don’t need too many variations. You just need to know what works for you and need to package it well. I couldn’t bowl those yorkers and loopy slower ones in these conditions. The yorker is a delivery I would like to use and get better at. I have seen myself fall into shiny things so many times. It is another platform for me to come, perform and show my skills. Just want to do that and enjoy whatever comes my way,” Harshal Patel added.

Chasing 154, India got off to an excellent start as openers Rohit Sharma and KL Rahul put on 50 runs in just 6.4 overs. Both the batters thrashed the Kiwi bowlers at every side, as Rahul brought up his fourth half-century during the game.

However, New Zealand bowlers got a sigh of relief when Rahul was sent back by the skipper Tim Southee in the 14th over. Rohit continued the carnage and also brought up his half-century. But, Southee struck back again and dismissed Rohit and Surya Kumar Yadav in the 16th over.

The Kiwi skipper’s wonderful spell came a little late, as Rishabh Pant smashed two sixes in two deliveries and brought India home with 16 balls in spare. The Men in Blue have now claimed the three-match series with a 2-0 lead.