A superb fifty by Mohammed Rizwan and cameo by Mohammad Nawaz powered Pakistan to a five-wicket win in a last-ball thriller Super Four clash against Pakistan at the ongoing Asia Cup 2022 on Sunday.

It was an exciting day of cricketing action for the fans as they got their money’s worth. Rizwan’s brilliant 71 off 51 balls proved to be the difference between both sides. Chasing 182, Pakistan openers Babar Azam and Mohammed Rizwan tried to give their side a solid start, mixed with some occasional big hits and consistent strike rotation.

However, in the fourth over, spinner Ravi Bishnoi struck for India, sending back Babar Azam for 14 off 10 balls while the batter was trying to hit it over the midwicket region. At this point, Pakistan was 22/1.

Southpaw Fakhar Zaman was up next on the crease. Zaman kept taking his time to settle while Rizwan continued to look good from the other end. They kept the scoreboard ticking for Pakistan and took them through the powerplay without any further damage.

Another spinner struck for the Men in Blue in the ninth over as Yuzvendra Chahal sent back Fakhar Zaman for 15 off 18 balls after he was caught by Virat Kohli at long-on while attempting to hit it big. Pakistan was now at 63/2 with this 41-run stand coming to an end.

All-rounder Mohammad Nawaz was next up on crease. He started his inning really well by smashing a four and a six in his first five balls. At the end of ten overs, Pakistan was at 76/2, with Nawaz (11*) and Rizwan (35*) at the crease.

The duo displayed some attacking intent while batting, Nawaz in particular. Rizwan also kept things steady from the other end. Rizwan brought up his half-century in 37 balls with four boundaries and two sixes and also helped his side touch 100-run mark in 12.2 overs.

The duo brought up their fifty-run stand in just 29 balls, keeping Pakistan in contention. In the final six overs, Pakistan needed 63 runs. 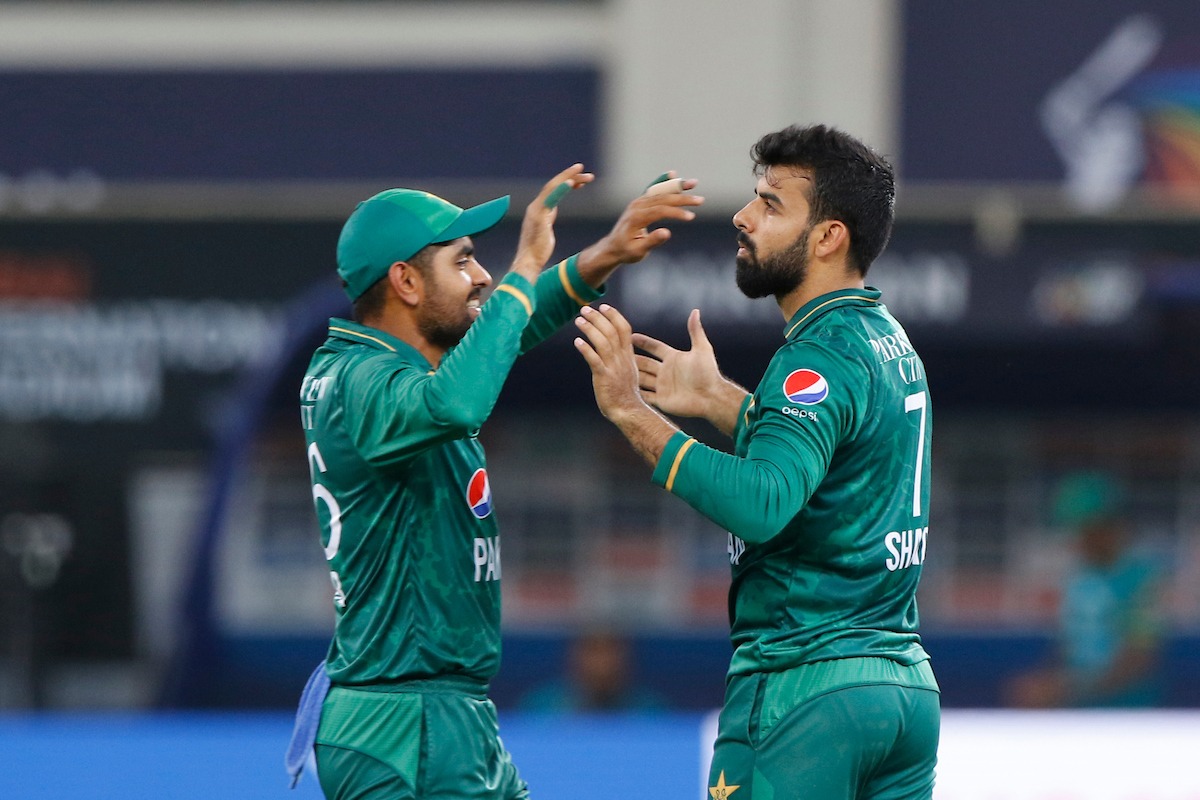 Two boundaries in the first two balls of the next over gave Pakistan an edge. This over bowled by Chahal gave away 16 runs and at the end of it, Pakistan needed 47 runs off 30 balls.

It was Bhuvneshwar Kumar that gave Team India a much-needed breakthrough, sending off Nawaz back for 42 off 20 balls and breaking the 73-run stand between the duo. It was Deepak Hooda who took a catch at long-off. Khushdil Shah was next up on the crease. With final four overs to go Pakistan needed 43 runs.

Rizwan kept the scoreboard ticking in the next over. Hardik Pandya was under pressure but delivered big wicket of Rizwan on the fifth ball of his over, sending him back for 71 off 51 balls after he was caught by Suryakumar Yadav. Pakistan had lost their 4th wicket at 147 runs and Pandya had revived India’s chances in the game after catching the big fish.

In the final three overs, Pakistan needed 34 runs. Asif Ali had joined Khushdil on the crease.

Ravi Bishnoi came to deliver the next over. Asif Ali was dropped by Arshdeep Singh. Bishnoi delivered some wides in his over as well. In the final two overs, Pakistan needed 25 runs.

Arshdeep came to deliver the final over. He took the wicket of Asif Ali to keep Team India’s hopes alive, with two runs needed in two deliveries. Ali was out for 16 off seven balls. Iftikhar Ahmed was the next batter. His side won the match with one ball to go by five wickets.

Ravi Bishnoi was the pick of the bowlers with 1/26 for India. Bhuvneshwar, Arshdeep, Pandya and Chahal took a wicket each. Earlier, Virat Kohli’s blistering 60 and 37-run partnership stand with Deepak Hooda guided India to post 181/7 against arch-rival Pakistan in the second match of the Super Four stage of the ongoing Asia Cup 2022 here at the Dubai International Cricket Stadium on Sunday.

Virat Kohli was in his best form as he smashed 60 runs in 44 deliveries, while Rohit Sharma scored 28 runs setting a solid foundation for the Indian team. For Pakistan Shadab Khan bagged two wickets while Mohammad Nawaz, Haris Rauf and Naseem Shah scalped one wicket each.

Put to bat first, India got off to a flying start as their openers KL Rahul and Rohit Sharma slammed Pakistani bowlers all around the ground while gathering 34 runs in three overs without losing a wicket.

In the fourth over of the innings, Rohit hammered Haris Rauf for 12 runs, while smashing one six and four. In the 6th over Haris Rauf delivered a stunning delivery dismissing India captain Rohit for 28 runs in 16 balls. After six powerplay overs, India’s score read 62/1.

In the 7th over Shadab Khan gave his team a big breakthrough as he dismissed Rahul for 28 runs in 20 balls. Suryakumar Yadav then came to bat on the crease. Suryakumar got off the mark with a superb four on the first ball he faced. He played a beautiful cut short towards the backward point region for a four.

Suryakumar could not do much and his stint on the crease was cut short as he was dismissed by Mohammad Nawaz after scoring 13 runs in 10 deliveries. Left-handed batter Rishabh Pant then came to the crease.

After 10 over of the innings, India’s score read 93/3. In the 11th over Mohammad Hasnain bowled a short ball to the former India captain and he hit it for a four towards backward square leg.

Kohli slammed a shot down the track on the very first ball of the 12th over and smashed Naseem Shah for a four towards extra cover. The duo of Kohli and Pant hammered Shah for 13 runs.

Pant could stand longer as he attempted a reverse-sweep on the ball of Shadab Khan and hit the ball straight into the hands of backward point fielder Asif Ali. He departed on 14 runs off 12 balls. Pakistan’s Hasnain gave India a major blow as he dismissed Hardik Pandya for a 2-ball duck.

Deepak Hooda then came to bat and opened his tally with a brilliant four on Hasnain’s delivery. In the 18th over Virat Kohli smashed a huge six and brought up his half-centuries in 36 balls. It was his back-to-back second fifty in this ongoing Asia Cup.