Rohit Sharma 4TH T20: In a major relief for the Indian cricket fans, it has been learnt that Rohit Sharma will be available for the last two games on Saturday and Sunday in Florida. The India skipper retired hurt during the 3rd T20 in St Kitts on Tuesday. The Board of Control for Cricket in India (BCCI) said the skipper suffered a back spasm. The information coming in from the team sources is that Rohit has recovered and will play the last two T20 Matches:

India currently leads the 5Match T20 Series 2-1. The 4th T20 will be played on Saturday in Florida.

Rohit Sharma Injury: In a huge injury scare, India captain Rohit Sharma walked off the pitch in India vs West Indies 3rd T20I on Tuesday. The Hit-Man was visibly struggling and the physios took a quick assessment before he decided to walk off.

Rohit suffered back spasms and BCCI declared, ‘medical team is monitoring the progress’. Rohit though later gave a positive update on his health when appearing for the post-match presentation.

“It’s okay at the moment. We’ve got a few days till the next game, hopefully, it should be okay,” said Rohit Sharma after the game. 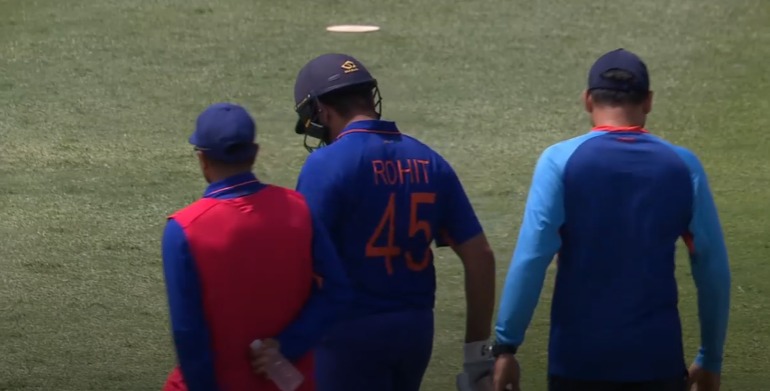 It seems having played back-to-back games in the span of 18 hours took the toll on the Hit-Man who instantly called for the physio’s help in just the second over of the innings.

After a short discussion, the Indian captain decided to walk off the field to nurse his injury. Rohit was seen clutching his back as he made his return to the pavilion in Basseterre.

It is worth noting that due to delay in luggage arrival, the 2nd T20 started more than 3 hours late from its scheduled time. That resulted in very little time for recovery for the players between 2nd and 3rd T20.

IND vs WI USA T20 – Indian Team gets VISA Clerances: Meanwhile in another good news Rohit Sharma & Co have received their Visas for the Florida matches.

While Ravichandran Ashwin and few others have alreayd reached Florida, the rest will fly out from Guayana today.

Rohit Sharma, Rahul Dravid, Sanju Samson and 11 others from the Indian touring party did not had visas to travel to US. But now the enitre squad has got VISA clearance and the matches in Florida are on. West Indies players have already reached Florida. That means the 4th and 5th T20 at Lauderhill, Florida is on.

Ravindra Jadeja, R Ashwin, Dinesh Karthik, Ravi Bishnoi, Suryakumar Yadav and Kuldeep Yadav, have already reached Miami meanwhile. They will be joined by the rest of the teammates on Thursday night.

The two games in Florida are scheduled to take place on Saturday and Sunday and the teams are supposed to travel and reach Florida by Thursday thereby giving them an added rest day.