Pakistan’s fast bowler Naseem Shah delivered when it mattered the most with the bat as he hit two crucial sixes to help his team clinch a nail-biting victory over Afghanistan at Sharjah in the Super 4 stage of the Asia Cup on Wednesday. The two sixes of Naseem is being compared with Javed Miandad’s famous last ball six against India at the very same venue in the 1986 Austral-Asia Cup final. Like Miandad, Naseem Shah’s six this time too has brought agony to India as the Men in Blue are now officially been knocked out of the Asia Cup 2022 along with Afghanistan. Meanwhile, Pakistan advanced to the final.

Needing just 130 runs to seal the victory over Afghanistan, Pakistan’s chase was derailed as the spirited Afghan bowlers kept picking up wickets at crucial interval. At one stage it looked like Mohammad Nabi’s men would go on to clinch a famous victory at Sharjah as Pakistan lost nine wickets for 118 runs.

With 12 more runs needed off the last seven deliveries Naseem Shah took a single in the last delivery of the penultimate 19th over to keep strike in the final over. With 11 more runs required off the last over, Afghanistan’s Fazhalhaq Farooqui, who took three crucial wickets earlier in the match ran into bowl the 20th over. 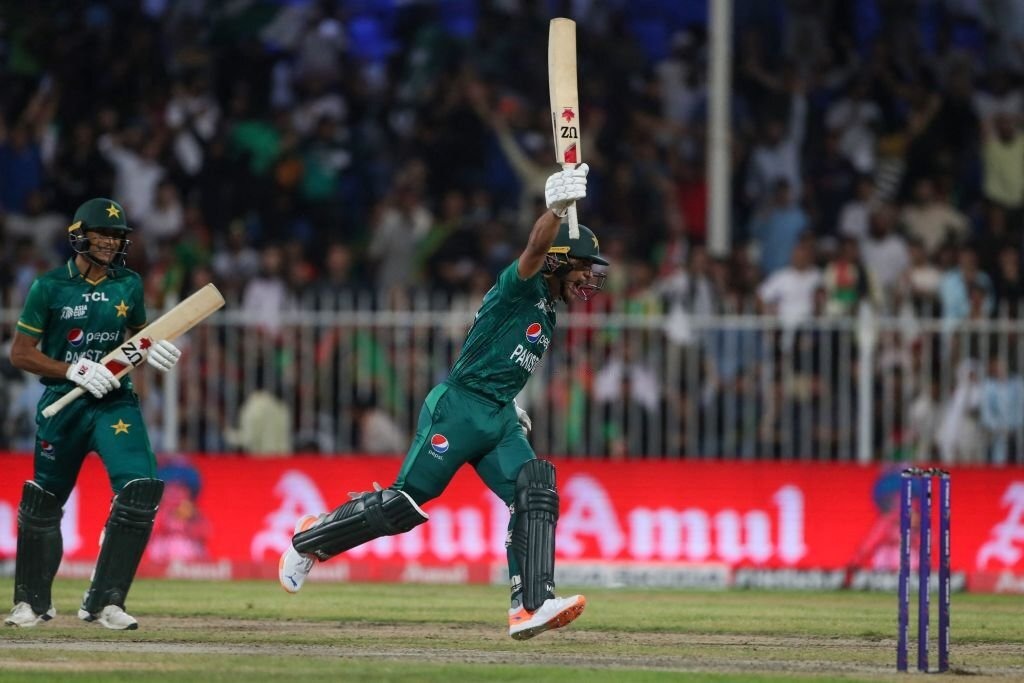 The pressure was on the 19-year old Naseem Shah as the teenager needed atleast two boundaries to help Pakistan win the game. He took on the challenge and whacked the first delivery of the over which was a full toss outside the off stump over the long on boundary for a six to bring back joy and optimism on the Pakistan dugout. With the shot, he reduced the equation to five runs off the last five deliveries.

The teenager didn’t waste time as he hit the very next delivery which was again a full toss into the long-off fence to seal the deal for Pakistan. Speaking about Naseem Shah’s innings, Pakistan skipper Babar Azam said, “Naseem was outstanding. At the back of the mind, I have seen Naseem play like this earlier, and I had the belief in him. This moment reminds me of Javed Miandad’s six. We would like to continue this momentum”

At the same venue 36 years ago, chasing a 246-run target by India in the final ODI match of the Austral-Asia Cup, Pakistan needed four runs off the final ball to win the match and Javed Miandad slammed a six off Chetan Sharma to script a famous victory. After three decades it looked as if Naseem Shah recreated that moment as he did the unthinkable by hitting those two crucial sixes.

This victory for Pakistan has closed the doors for both Afghanistan and India to qualify for the final. Having won two games in the Super 4s stage by defeaying India and Afghanistan, Pakistan have advanced to the final and will face Sri Lanka in the final. However before the summit clash, both the teams will meet for the final match in the Super 4s stage that is scheduled to be played on Friday, 9th September.