England skipper Eoin Morgan expressed his disappointment after his side got thrashed by New Zealand by five wickets in the semi-final match of the ICC Men’s T20 World Cup here at the Sheikh Zayed Cricket Stadium on Wednesday.

“Coming into the game we knew both sides were close in skill. Full credit to Kane and his team. They outplayed us today. Have represented ourselves in this tournament really well. Proud of the guys. They have given everything in this tournament,” said Eoin Morgan in a post-match presentation.

“Thought we were right in the game until probably the 17th, 18th overs. We had them exactly where we wanted them up until that point. It was (sluggish). We’re a six-hitting side but we struggled to hit sixes. But we hung in there and posted probably a par score. To come out and hit sixes from ball one like that – full credit to him (Neesham). Absolutely love playing cricket at the moment. At the forefront of change both on and off the field (the team),” he added.

Chasing, New Zealand got off to the worst start possible as the side lost opening batter Martin Guptill (4) in the very first over bowled by Chris Woakes. The Kiwis were given a body blow in the third over as Woakes sent skipper Kane Williamson (5) back in the hut. After the end of the powerplay, New Zealand’s score read 36/2. 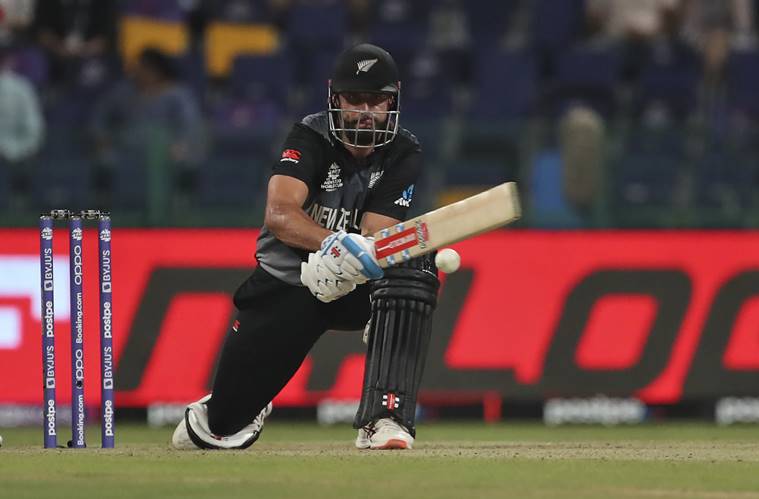 Devon Conway and Daryl Mitchell found run-scoring difficult and at the halfway mark, New Zealand’s score read 58/2 with the side needing 109 runs to win from 60 balls. The 82-run stand for the third wicket was finally broken by Liam Livingstone as he had Conway (46) stumped at the hands of Buttler with New Zealand still needing 72 runs to win from 38 balls. Glenn Phillips (2) was the second wicket for Livingstone and England was in firm control with New Zealand at 107/4 in the 16th over.

In the 17th over bowled by Chris Jordon, James Neesham and Mitchell managed to score 23 runs, and the match swayed in favour of the Kiwis, with Williamson and the team needing 34 to win from 18 balls. However, another twist came in the game as Adil Rashid sent Neesham (27) back to the pavilion, and New Zealand required 20 to win from 12 balls.

In the end, Mitchell guided New Zealand to a five-wicket victory with six balls to spare.
New Zealand will now face the winner of the second semi-final between Pakistan and Australia in the summit clash on Sunday at the Dubai International Stadium.