The season will kickstart on September 9 with the four-team Pakistan Cup Women’s One-Day Tournament in Karachi and will be followed by the national squad’s historic series against the England Women’s team. This series will be the English Women’s first-ever visit to the country. Captained by Heather Knight, the current 50-over Women’s World Cup champions will play two T20Is and three ODIs from October 10-22 at the Pindi Cricket Stadium in Rawalpindi.

Towards the end of 2021, the Pakistan squad will travel to Zimbabwe for the ICC Women’s Cricket World Cup Qualifiers, in which they will play seven matches subject to their qualification for the second round of the tournament. The team will participate in the ACC Women’s Asia Cup, the details of which have not yet been announced. Prior to their departure for Zimbabwe, the PCB is also in talks with West Indies women for an ODI series. 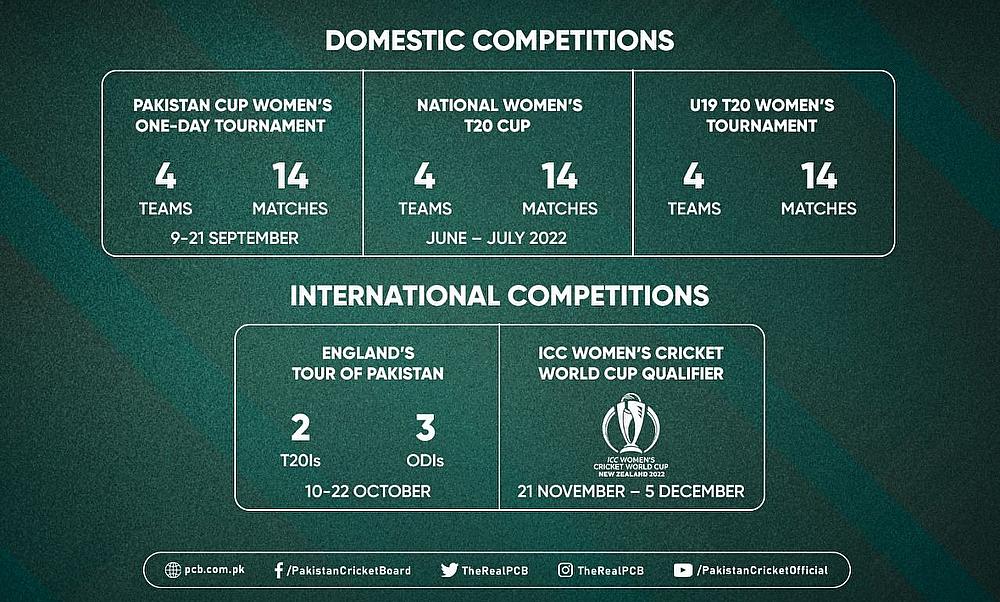 The reason for this packed season organized by the PCB is to provide the women players with more competitive and quality-based cricket. The PCB has increased not only the number of matches but also the number of teams across all One-Day and T20 domestic tournaments to help players in enhancing their skills in match situations. An increase in the number of matches played is also a financial incentive for the players in terms of more match fees. Additionally, the PCB including a fourth team for the season will provide opportunities for more players to showcase their performance in the domestic competitions.

The PCB has also roped in a U-19 T20 tournament this year. It will help in identifying young and new talents to prepare for the first edition of the U-19 World Cup scheduled in 2023.

The season will end with the 14-match National Women’s T20 Cup to be played in June-July next year ahead of the national squad’s departure for the Birmingham 2022 Commonwealth Games.

This upcoming season is going to be like something that has never happened before. With so many matches being played against different teams, this season will be the perfect preparatory method for the Pakistan women for the upcoming World Cup next year.

The chairperson of the women’s selection committee, Urooj Mumtaz declared, “We are pleased to announce what promises to be an action-packed women’s cricket season for 2021-22. The upcoming season holds a great significance in Pakistan’s women’s cricket history as we have not only planned quality-based competitive domestic tournament, but also major team such as England Women, will also be touring the country for the ever first time. Pakistan has never seen before such a jam-packed women’s cricket season. The domestic events and the bilateral international series have been designed in a way to provide effective opportunities to the players to prepare themselves for the ICC Women’s Cricket World Cup Qualifier.”

The match schedule, teams, and other details about the domestic tournaments will be announced by the PCB closer to the start of the events.